Months of intense politicking and a drawn battle for the soul of Edo State, dotted by brickbats, threats of all sorts, and a heated polity, ended yesterday. It ended with Governor Godwin Obaseki of the Peoples Democratic Party (PDP) as the victor and his rival, Osagie Ize-Iyamu of the All Progressives Congress (APC) coming behind.

By the turn of event, in a somewhat interesting twist in the nation’s political history, or perhaps by a stroke of fate, Obaseki became the first governor to have won governorship election on the platform of the two major parties, PDP and APC, while Ize-Iyamu, on the other hand, lost election bids on the two parties’ platforms.

Obaseki garnered a total of 307, 955 votes in the Saturday, September 19 poll, to put the Edo State Government House beyond his APC challenger. 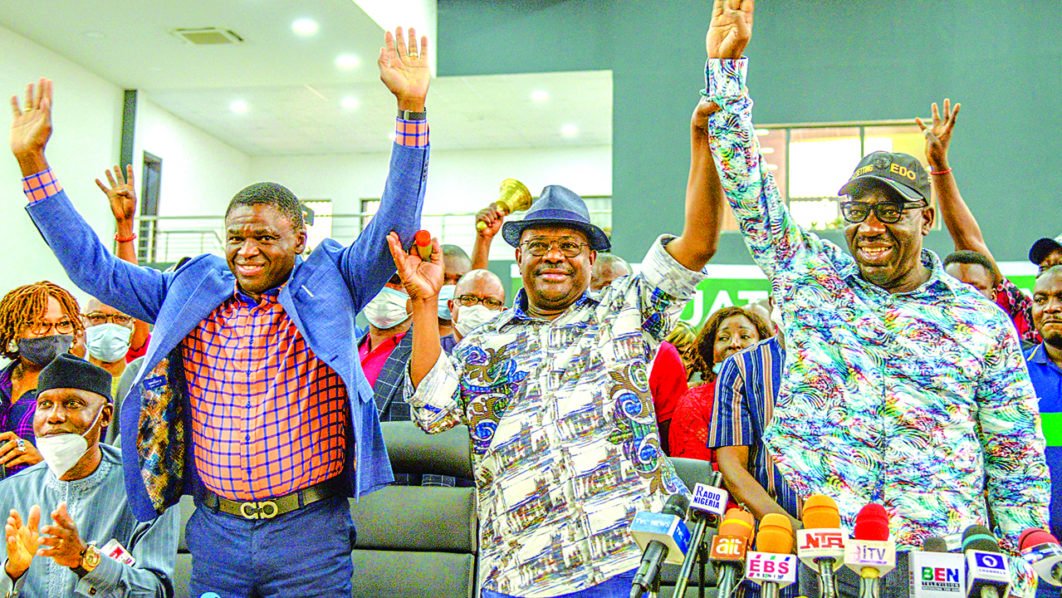 Announcing the result of the election, the Edo State Resident Electoral Commissioner (REC), Mr. Johnson Alalibo, who is the chief returning officer, declared: “Godwin Obaseki of the PDP, having satisfied the requirement of the law and scored the highest number of votes, is hereby declared the winner.”

A breakdown of the result showed that a difference of 84, 336 votes separated the winner, Obaseki, and his closest rival, Ize-Iyamu of APC.

The result was presented to him by the PDP agent and Member representing Oredo Federal Constituency at the House of Representatives, Omoregie Ogbeide-Ihama, at his residence in GRA, Benin City.

No sooner was the final pronouncement made on the election result than wild jubilation broke out in various parts of the state, especially Benin City, the state capital.

Immediately his declaration as the winner, Obaseki thanked President Muhammadu Buhari for defending democracy and commended INEC and security agencies for not interfering with the process.

Referring to the loyalty of his deputy, Philip Shaibu, Obaseki said the collective will of the Edo people “made us to triumph over godfatherism during our re-election campaign.”

He praised the PDP for providing him an alternative platform, upon which he triumphed in the poll, saying: “Working with my deputy, Philip Shaibu, we are determined and committed to making Edo great again.”

The President applauded the election process and urged the returning governor to show grace and humility.

“I have consistently advocated for free and fair elections in the country because it is the bedrock of true democratic order. Democracy will mean nothing if the votes of the people don’t count or if their mandate is fraudulently tampered with.”

In a statement by his Senior Special Assistant on Media and Publicity, Garba Shehu, on Sunday, President Buhari also commended the people of Edo State, the parties, candidates, and security agencies for conducting themselves responsibly.

On his part, former President, Goodluck Jonathan lauded the INEC for overseeing a process that allowed the votes of the good people of Edo to count.

In his commendation message to Governor Obaseki on his re-election yesterday, Jonathan said: “Democracy can only be consolidated to promote good governance in our nation and continent when our elections become credible, transparent and truly represent the wish of the voters. Democracy is about the good of all the people and not for winners and losers.

“As the election has been contested and won, I urge His excellency, Governor Obaseki to rise above partisan politics and govern for the good of Edo people, irrespective of party leaning. This is the way to deepen our democracy and bring development to the people.”

Bemoaning APC’s defeat, the party’s state chairman, Mr. Anselm Ojezua, noted that the state chapter of the party “has been vindicated by the result of this election because we have always held the position that Governor Obaseki was the preferred candidate.”

While regretting that Ize-Iyamu campaigned without the party, Ojezua said the governorship candidate carried out his campaign with an illegal body called the Edo People’s Movement.

He stated: “There was a consensus within the party that Governor Obaseki was the consensus candidate. But, we had some people who felt larger than life, who believe they have the power of God Almighty and they went against the wishes of party members within the state. They took advantage of their position in Abuja and they managed to push the governor out of the party. The result of this election is the result of that perfidy. So, this is where we are now.

“In doing that, they destroyed the party, because they created a faction out of the party with an unconstitutional contraption called Edo People’s Movement, installed a candidate for the party against the wishes of the members and this is the result. They conducted their campaign without a party, using a borrowed platform as it were. This is the result.”

Chairman of the PDP Governorship Campaign, Nyesom Wike, said Obaseki’s victory signals end to godfatherism, adding that the governor’s second victory “is a fulfillment of a dream to end godfather politics in the South-South region.”

Flanked by other members of the campaign organisation, including Governors Ifeanyi Okowa (Delta) and Seyi Makinde (Oyo), Wike declared: “We have fulfilled our obligations of kicking out godfatherism, first in Rivers, now in Edo State. Power truly belongs to the people of Niger Delta; congratulations to my brother Governor Obaseki and the big PDP family.”

Former Vice President, Atiku Abubakar, in his reaction, also said Obaseki’s victory signals the end of godfatherism in Nigeria, stressing that the governor’s return to office “ushers in a new dawn in Edo State.”

According to the 2019 PDP presidential standard-bearer, “the hard-won victory of Obaseki was not just a victory, but a declaration of independence from the anti-democratic forces of godfatherism and militarism.

“There is a new wind of democratic change now blowing all over Nigeria. The forces of despotism, nepotism, and interlopers cannot successfully withstand this force.

“Nigeria shall soon be totally free from these forces, from Kaura Namoda to Lagos. The only power that will stand in Nigeria is people’s power, not the power of godfathers, or despots.”

Also reacting, the immediate past President of Senate, Dr. Bukola Saraki, said it was a good development that the Orhiomwon LGA results, which created a little hiccup during collation and declaration of results of the gubernatorial election were resolved peacefully.

“Kudos to the INEC. I want to commend President Muhammadu Buhari for demonstrating leadership. I believe his statesmanship in instructing that there must be credible polls is what has given us this level of transparency,” he said.

PDP governorship aspirant, Ken Imasuagbon, while praising President Buhari, said Nigeria had come back to earn respect in the comity of democratic nations.

“The implication of Obaseki’s re-election is that Nigeria has come back to the reckoning of the international community and that President Buhari is a good man.

IMPRESSED by the outcome of the poll, the PDP has said the “new found image of INEC will gather more threshold in future elections, particularly October 10, 2020, Ondo Governorship Election.”

The party, however, called on INEC to strengthen its processes, particularly the use of card readers to forestall delays witnessed in the accreditation of voters.

At a press conference by its national publicity secretary, Kola Ologbondiyan, on Sunday evening in Abuja, the party stated, “Our party celebrates the resilience and courage exhibited by the people of Edo State in resisting the antics of the enemies of democracy, who, as vote buyers, patrons of lions and tigers, as well as beguilers, attempted to take over the political space of Edo State.’’

In a separate statement by PDP National Chairman, Uche Secondus, the party urged President Buhari to immediately take advantage of the euphoria of this Edo election to sign the amendment to the Electoral Act, which had been before him since 2018.

Secondus noted that Saturday’s governorship election was better than previous elections conducted under President Muhammadu Buhari and advised him to deepen democracy by continuing this way.

Meanwhile, the Independent National Electoral Commission (INEC) has said it recorded a qualitative improvement in its conduct of the election.

Speaking with The Guardian on Sunday, the National Commissioner and Chairman of Information and Voter Education Committee, Festus Okoye, said the conduct of the Edo governorship election showed conclusively that the commission had improved tremendously.

He said: “The election shows that the processes and procedures of the commission are such that it is now almost impossible for an INEC staff to manipulate, disrupt and compromise the electoral process.”

Asked why there were widespread vote-buying despite the Commission’s commitment to tackling the menace, he argued that it was not the responsibility of INEC to police vote buying and selling.

“We recorded a qualitative improvement in the conduct of elections. Deployment of personnel and materials followed our laid down rules and procedures. We are happy with our outing and we commend the security agencies for providing good security for the election. We are following up on a few of our staff and ad-hoc staff that sustained gunshot and machete wounds in the course of serving their nation. We hereby serve notice on political parties and their foot soldiers that the Commission will on no account tolerate the targeting of its staff and workers,” Okoye stated.